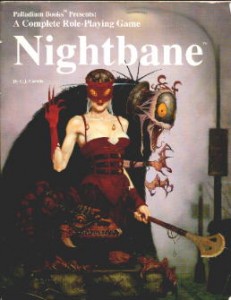 The Poster Child for a Rules Redo

Storytelling is at the heart of every role-playing game.  Think of the game master as a director and the players as actors in a very dynamic piece of theatre. Though, they are not in total control. Chance plays a part in this play as well.   Gamers use a rules system (usually dice based) to determine success or failure and add an element of risk to the game experience.  When the story is original an exciting and the rules serve to advance the story, all is well.

Sadly, that is often not the case. Games with amazing stories often endure grossly inappropriate rules that bury exciting worlds in terrible mechanics. These are my top picks for games with great plot and world design, but systems that need serious updates. Of course, few of us have the time or energy to completely redo a game’s rules, so this is just wishful thinking on my part. Hey, it is Christmas, the time of miracles. You never know…

This 1995 offering by CJ Carella is one of my favorite game worlds. An urban fantasy version  of the “X-Files” combined with superhero PCs and a secret invasion from another dimension. Lots of sneakiness and intrigue wrapped in a growing horror. A great game to play with those that do not own the book. Makes the revelations about the world all the more startling.

Did I mention it uses the Palladium game system?

I actually quite enjoy some of the other Palladium game worlds (Rifts,) but their rules system is unclear, unbalanced and nearly unplayable.  Palladium rehashed this system so many times that you would think it would improve with each release. Not so! Cut and paste is the order of the day. I long ago gave up on their product lines, though I heard there was some sort of new rules release in the past couple years. Someday I might rouse myself to take a look at it, but a new version of Nightbane is what I really want.

A rousing space adventure from days gone by. I have fond memories of carefully generating a character in anticipation of a new game. I gave him statistics and started him on the path of personal development, went to school, attended the space academy and then died.

Yes, died. Traveller had rules for killing you during character generation. Admittedly this was back in the days of truly random character creation, but it was unusual even then.  Combat system was not bad, but the character generation was ugly. There are many versions of Traveller since, but I have a soft spot for the original “little black book” game. Hence its appearance on my list.

White Wolf, strictly speaking, is not a game but a company. They created the elaborate and interesting “World of Darkness” comprised of “Wraith,” “Mage” and the venerable “Vampire” role-playing games, among many others.  Great story and deep character development. A favorite of LARPers everywhere. I played a few times and could not stand the incredibly simplistic character generation and combat mechanics. I know this is a story based game, but it still felt a little…talky. I like a bit more crunch in my role-playing games.

West End Games attempt at a cross-genre game (similar to Rifts.) Multiple universes collide and struggle for dominance. It was possible for a cybernetic ninja to battle a pulp-villian in a Jurassic era jungle. Great fun, until you started running a combat. Some PCs were tough and some were fast. The fast ones dodged attacks very well and the tough ones absorbed damage. Problem was that the damage from a single hit was sufficient to put down a “dodge” character that traded hit points for speed. Occasionally referred to as the “glass-jawed ninja.” Tough to hit, but it only took one hit to kill them.  This system also suffered from “complexity creep.” Every supplement added new rules and very quickly it got out of hand. One bright spot was  a deck of cards to add randomness to combat. It was a blast! Someday I hope this game makes a comeback in some form, but I am pessimistic.

Paradigm Concepts created an exceptionally deep world for this game of dark horror. Set in the early years of the American colonies, Puritans, religious fanatics and native americans  do battle with the forces of the devil himself. One of the best written game books I read in a long time. I especially enjoyed the historical research. It makes the list by using a system that reminds me of “White Wolf’s” d10 system. Not identical, but close enough.  This is one of the only games I might suggest going with a pure LARP or the Amber Diceless rules set.

Anyone else have some ideas? I am sure there are other great games buried under bad rules.

11 thoughts on “Great Story, Terrible System–Games that Need a New Set of Rules”