“On the Lamb Productions” just released “ 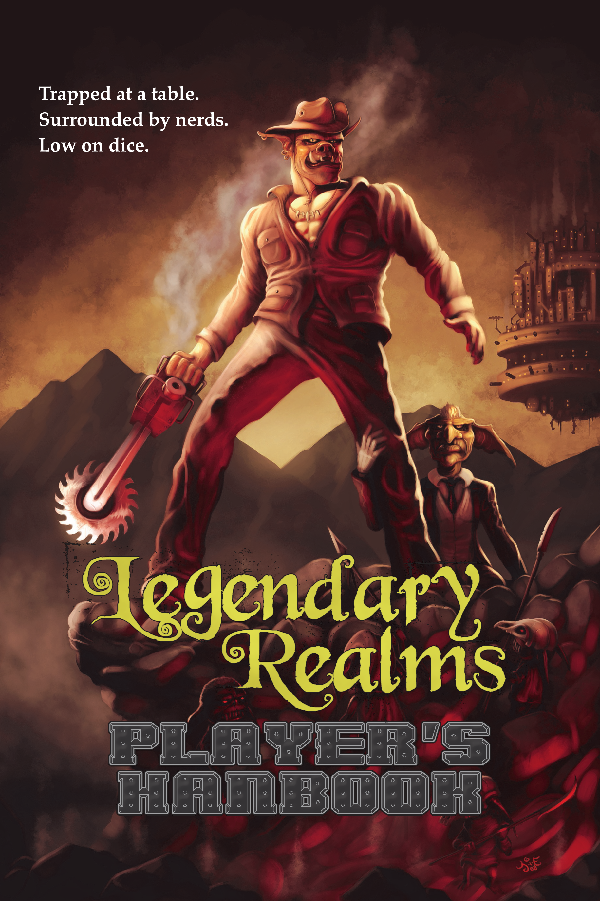 Legendary Realms,” their new role-playing system. I previously interviewed the “On the Lamb” team in an earlier post about their company. You might want to check it out before reading this review.

Full Disclosure: “On the Lamb” provided a free copy of this book for review.

Upfront Review: A simple RPG with a modular rules setup. It allows you to pick and choose which bits you want to use for your campaign. Campaign background is a bit shallow so it is a game best suited to beginners or a “do-it-yourself” DM into world creation. Humor is used wisely throughout the book and keeps it interesting. My only issues were the sub-standard art and some editing errors.

Now on to the review.

“Legendary Realms” is the first effort from the “On the Lamb Productions” team. A compact, soft-cover book of 190 pages, it contains a basic rules-set for running a “LR” campaign. Production quality on the book itself is good, with a glue binding and some nice cover art.

Before I get into the “nuts and bolts” of the game, I should mention the unusual tone. Games in the past used gimmicks to make what is a rather dull experience (reading a rules manual) entertaining. Letters from notable NPCs or entire books written as a tale told by a villain are relatively common. “LR” chose a different path. Humor.

The cover sets the tone with a clever riff on the original “Army of Darkness” poster with a goblin standing in for the pretty female love interest. Humor appears throughout the book, usually in the chapter headings, but occasionally elsewhere in the text. Chapter one has my favorite for the entire book.

Some of the humor fell flat, but I thought it was a nice change from the deadly serious gaming tomes (White Wolf, I am looking at you!) that make up the RPG universe.

“LR” utilizes a modular rules system that allows players to pick and choose which rules modules their campaign needs or wants. During my previous interview with the authors, they mentioned future publications with more module options. This book, the “LR Players Handbook” contains modules for skill checks, magic, combat and equipment. The basic elements of any RPG.

Combat and skill resolutions use a relatively simple system of d10 rolls to determine success or failure. Character generation is also easy, utilizing a point buy system to determine personal statistics. The system is less complex than the 3.5 OGL system, but more math intensive than 4th Edition Dungeons and Dragons.

“LR” is clearly trying to be a “generic” system like GURPS, but there is some information about “LR’s” fantasy world. Nations, cities and factions in the world all have brief entries. While adequate, the “world building” section of the book did not overly impress me. It is adequate to run a campaign, but many DMs will be looking for more depth. Future supplements may resolve this issue, but be warned that the “world” that comes in the book is a bit thin on detail. As I re-read the previous sentence during editing it occurs to me that some DMs might actually like this setup, as it allows them to fill in the gaps with their own ideas. As a personal preference, I like my campaign worlds a bit more fleshed out.

One area of the book that needs some improvement is the art. Some of the art is great (the cover,) some of it is adequate and some was well… bad. The art is just for a little variety in the page layouts and does not really impact play. There are no pictures of monsters, for instance so it is not a major issue. Still, I think an all text manual is better than using poor quality art. Since this is a first effort by a new company, I will not dwell on this too much, but it deserves a mention. There were also some editing issues in the grammar that I noticed. Again, not major, but noticeable.

“Legendary Realms” is far from perfect, but it is a fun little game that would be a great introduction to a group of new role-players looking for a quick-start system that does not involve downloading an encyclopedia into your skull before playing.