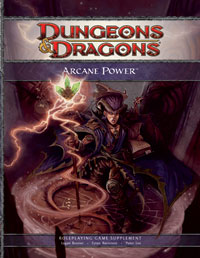 Arcane Power is the latest 4th Edition D&D offering from Wizards of the Coast. If you are familiar with their Martial Power book, then you know what you are getting yourself into with this book. Arcane power expands the options available to your favorite arcane classes.

The first five chapters of the book deal with new class features,  abilities, and options for all Arcaniacs.

Of course the Warlock and Wizard finally get some loving. The Warlock has a new Vestige Pact, which allies itself with strange unnatural beings. The Wizard has two new builds, an Illusionist and a Summoner.

The Swordmage from the Forgotten Realms Players Guide, now has a new Aegis that will ensnare your opponents and make their lives miserable if they choose to engage other targets.

The Bard and Sorcerer classes, from the newly published PHB2, also get some love here. The Prescient Bard will help shape fate and luck to his will.  And the Sorcerer, already having Dragon Magic and Wild Magic, expands its role to cover Storm Magic and Cosmic Magic.

All of these classes have additional powers, and Paragon paths to expand your role-playing experience.

That is the book in a nutshell, here are my thoughts:

I really like the new Bard build. They were very creative in their use of powers and effects. It really shows off the flexibility of 4E and its exception based system. If I ever play a bard, it will be a Prescient Bard.

My favorite Sorcerer build is still Wild Magic (PHB2); however, the new Cosmic Magic is a close second. The cosmic cycle adds an interesting twist to the class with three possible persistent effects that can change throughout the encounters. And I would play a sorcerer just to play the Blizzard Mage Paragon Path. Not because it is that cool or anything,  just because it is my cup of tea.

What they did with the Vestige Warlock Pact is just plain awesome. I was never a fan of the Warlock, but I am with this build. Basically your character associates with, and gets a boon, from one of a couple different mysterious entities. As you cast Daily Powers, it unlocks new entities that you can ally yourself with. So your boon will keep changing, if you choose, throughout the game.  And don’t fret ye Warlocks of ye other pacts. There are plenty of new powers go to around. Also, there are new paragon paths, specific to the dark, infernal, star, and fey pacts in addition to vestige and non-pact specific paths.

Ah, the Wizard.  My first 4E home game character. I really enjoyed delving into that class, and with this book, wish I still played him (I DM that group now). When WOTC put Dragon Magazine as part of their DDI experience, I signed up. And I really enjoyed it, especially because it had articles like “Class Acts: Wizards” by Rodney Thompson (found in Dragon 364). I could use some unknown spells that brought that “Wow what is that” factor to the table. That particular article introduced Illusion spells to the Wizard. Needless to say, I am very disappointed seeing all of those spells reprinted in the new Arcane Power book. Not only does it make me wonder why the are recycling instead of adding, but it cheapens my DDI experience as well. Why do I need to read Dragon, if it is going to be reprinted in the next book? And to make matters worse, I don’t see Rodney Thompson’s name in the credits of Arcane Power. Shame shame. At least the Warlock’s Star Pact wasn’t also reprinted in this book.

As far as the rest of the content, I was a little hesitant that the Wizard needed yet another Implement option. But I really like what they have done with Tomes, and this will be my go-to implement for future wizards. The summoner wizard is obviously a big deal. I was never into the summoners, but if you were, you will like this one. I like the summoning rules that will keep them fun, but not creature abusers. (Though I have PETA on speed dial just in case).

And I would like to welcome GREASE back to the spell book of 4th edition wizards everywhere! Even more slippery then before!

And we can’t forget GLITTERDUST! This party favorite will still be the bane of invisible critters everywhere.

Chapter 6 is pretty straight forward. Feats that will bump this, buff that, and make this new ability a little better. Same old stuff to keep things on an even keel. It is getting pretty specific on some though.  For ‘True Dragon Soul’, it is a feat for Dragonborn Sorcerers who took Dragon Magic. and there any many other Race/Clase/Build specific feats.

You can now have familiars! There are 12 familiars, and the feats that can add them to any Arcane class. Again, I really like the rules on how they implemented them. Switching between passive and active mode is always something we did under-the-table in third edition. Glad to see it is part of the rules now.

This section is not taking away from the upcoming Adventurers Vault 2. It only contains Tomes. New wizards with the Tome Mastery will need magical tomes to slay the beasts at hand.

I enjoyed the new rituals, but wished there were more. I would figure that this would be the go-to place for all the cool rituals. I understand that they have a page count to adhere too, but more would have been nice. Though, I am still struggling with getting my home game to start using rituals. They can do some damn cool things and I am a ritual fan.

The artwork and layout, as always, is fantastic.  And as I have complained about in previous reviews, I don’t like the fact that they reuse art from past books. It isn’t horribly bad in this book, except for the bard on page 18.  This image of Gimble, the 3.5 Bard, is burned into peoples brains and SHOULD NOT have been used again in a book.