“Diplomacy” is my favorite board game. Honestly, I think it one of the greatest tabletop games ever. There are no cards, no dice, no luck of any kind. Battles are won and lost on the strength of your negotiating skills and unpredictable “allies.” Even then, allies are one turn away from becoming enemies. Lying, espionage and misinformation are encouraged, nay, required to win the game. Each player acts with ruthless self-interest, just like the real world. 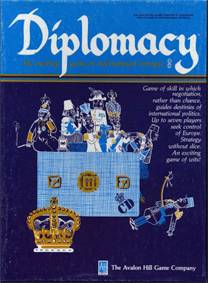 If you are unfamiliar with “Diplomacy,” take a moment and download the rules. The mechanics are incredibly simple and easy to learn and teach.

I suggest using “Diplomacy” to resolve a big war between several nations, or even a large skirmish where nations maneuver for position. Instead of the GM just telling the players how it turned out, make the players directly influence events.

There is some preparation to make the integration work. First, you need several nations (at least one for each player, though you could play more than one nation if you have more nations than players) that have opposing goals. Since most role-playing worlds tend to favor conflict between nations for story reasons this is trivially easy. Next, either create a map or use an existing map of your world. Assign starting army and navy setups based on your world’s reality. The big, militaristic nation fields more units than a smaller nation or an island nation that has a larger navy than army. Look to the initial “Diplomacy” setup rules for inspiration and guidance.

A word about balance. “Diplomacy’s” map and starting unit placement balance relatively well, but it is not perfect. Do not worry too much about balance in your setup. So what that one of the players only has two armies and others get four. If your world has a military imbalance then the 2-army player had better make friends with a neighboring country fast! Such is politics.

Assign players to specific countries and get the game going! “Diplomacy” is usually a solid 4-6 hours depending on negotiating speed. To keep things moving, I suggest a 5-10 minute limit in the negotiating phase. Setting an end condition (10 countries taken) or a specific time is also a good idea.

Once the game is over, integrate the results into your campaign. Conquered nations, scorched and defeated, now cover the land. Perhaps a new alliance, forged of necessity, emerged victorious. Regardless, players directly impacting the fate of nations is far more entertaining than a GM deciding winners and losers by fiat.

In the interests of full disclosure, I have never tried this idea. If someone does give it a go, please let me know how it goes.

2 thoughts on “Diplomacy: The Board Game as a Role-Playing Encounter”