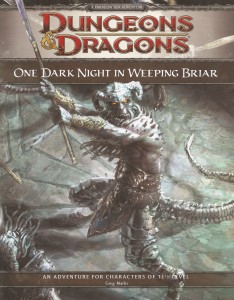 This weekend I had the opportunity to judge the D&D Worldwide Game Day for the release of the Players Handbook 2. To my knowledge, all the players left that day having some fun, and that is what is important. However, as happy as I am with D&D 4th edition, the World Wide Game Day this go around rated LOW on my happy meter. And here is why:

Materials.  I know we are in a bad economy right now and companies are having to cut back. But, Wizards of the Coast  is the one that decided to do to three WWGDs per year and not just one. Apparently they decided to to support each game day at 1/3 the cost to make up for it. The game store I ran the game had historically ran about 10 tables / 2 times a day for previous WWGDs. They would average about 15-18 sessions. However, WOTC limited WWGD supplies this go around to 3 sets per store. This means only three judges got materials and those judges had to run both slots (for a total of 6 tables). There ended up being a WHOLE lot of people turned away, even with tables being run with 7 PCs (added difficulty for the DM too). WWGD is a marketing tool is it not? Wouldn’t you want to get as many people to experience your product as possible?

In addition, there was no special prize for the players to remember the experience. WOTC has done thing in the past like giving out a free D&D Dungeon tile or a free mini to the players. This time. NADA. I can’t tell you how many times I heard the players complaining about this. Yes, something that simple does matter.  Wouldn’t you want the players to leave with a sort of D&D business card?

On a positive note, they still provided the DM with a print module, a poster map, and all the corresponding miniatures. Content quality aside (discussed below), the materials for the DM are spot on. And Honestly, the DM getting to keep the mini’s and the map is why I pimp myself out as a DM for these things.

Miniatures: Related to materials; but, I wanted to single this out.  Maybe they were not ready, but this would have been a great opportunity to showcase some of the new D&D mini’s releasing next month. Instead we got all mini’s from the latest set.  Come on guys, leverage your power of having people stare at these things for 4 hours. There were no “ooohs” and “aaaahs”.  Just, “Yeah, I got that mini, too”.

Characters.  Ok, here is the second problem. This is suppose to celebrate the release of  the PHB2. However, the characters only partially accomplished that goal. Here are the five pre-built characters for the WWGD:

The Classes are OK (4 PHB2 classes); but, one person is stuck with a Paladin. WTF WOTC?. You published 8 new classes; so there is no call for having a PHB1 class in there. Did that poor Paladin at least get a new race? No way, only 1 out of the 5 had a PHB2 race. WTF WOTC again? This is atrocious.  Why are you not marketing your PHB2 stuff at the PHB2 gameday?

In addition, the character sheets were rife with errors. It is pretty sad, and doesn’t say much for the game when the creators can’t get their own rules correct. They could have used their Character Creator program at least.  That also could have been another marketing opportunity.

Story: This was the worst part for me as a DM. The WWGD module (One Dark Night in Weeping Briar) story sucked. It was corny and unbelievable. The creatures obviously had to be pulled from the latest D&D Mini’s run only, so the encounters were unbelievable and ill fitting (minus the last one which I thought was decent). Role-playing?  Fugetaboutit.

And the biggest problem, it was billed for 2-3 hours. Did the marketing department bother to talk with the game designer?  This module ran at about the 4 hours mark for all of our tables.  And that was with me cutting ALL ENEMY HIT POINTS IN HALF. A DM colleague ran them at full HP, but skipped an encounter altogether. Ran as is, this game would have taking 5-6 hours (2-3 times the published length).

So in the end, although the players said they had fun, were not playing the full game and were rushed through the encounters. What VERY LITTLE role-playing was even available in the module had to be cut short due to the 6 hour module having to be fit into a 3 hour window. (thought I had 4, but I had to skip lunch).  Don’t you want to put D&D’s best foot forward?

PC Level: 11th level players. Good idea on paper, BAAAAD idea in reality. For the release of the “Monster Manual 2”  or “Dungeon Master’s Guide 2,” it might work. For the release of new classes that players have zero familiarity?  Having the players learn the new classes ate up a bunch of time too. And the people who have never played D&D before? Wow, that was a hard table to get through. Let me recommend level 3 or 5 next time for game days with new classes.

So, in the end I survived the PHB2 World Wide Game Day. And, I look forward to judging the next one, but only for the free stuff. However, personal draws to the WWGD aside, I can not recommend these game days to players until WOTC steps it back up a notch and fixes these problems.