Ex-illis the interesting software-driven tabletop miniature game released a bit more information about the nuts and bolts of the system, notably melee combat. 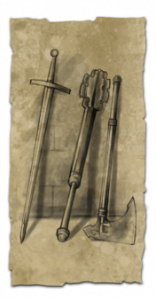 The explanation is chock full of interesting tidbits about how combat hit and defense scores are calculated and what some of the on-screen icons represent. It is a bit long but worth your time to get a greater understanding of how combat works in “Ex-illis.”