I feel like an old man rocking on his porch swing, reminiscing of simpler times.  I still own a first edition printing of classic D&D, Gamma World, and Star Frontiers.  I own Mekton II, Battletech, and Top Secret.  I remember when the best artwork seen in role-playing games were only found in Palladium.  Now it seems you won’t be credited with good artwork unless it’s full color and features some form of digital element.

Back when Amethyst was a free RPG conversion for D20, I had scoured the web seeking out inspiration from the massive depository of artwork found there.  I later sought permission from several artists to use their original illustrations (non-commissioned) with my game.  In all, I sent out about thirty emails.  Of those, only two said no (and would be immediately vacated from memory).  The remaining majority had offered their blessings with a few praising me for even asking (sound advice, by the way).  These included several artists now considered as close to being celebrities as this industry can offer.

When Amethyst attempted professional publication (still 3.5) years later, I returned to these artists, inquiring if they wanted to be paid for original artwork tied to Amethyst.  The majority said yes.  Unfortunately, many were considerably out of my price range.  One charged $1000 per image while another wouldn’t go below $500 for a basic sketch.  Filtering these out, we were left with a cadre of trained artists, nearly all of which would only work in color.

We came to the unfortunate conclusion that we could only afford about five color illustrations (in a printed book with no color) for this edition.   The cover responsibilities eventually fell to Jaime Jones, a talented and budding artist I had met years before.  Later contracts with Arenanet and Wizards of the Coast would net him significant recognition (my primary magic deck features several of his cards).  Jaime would go on to do two more pieces for us. 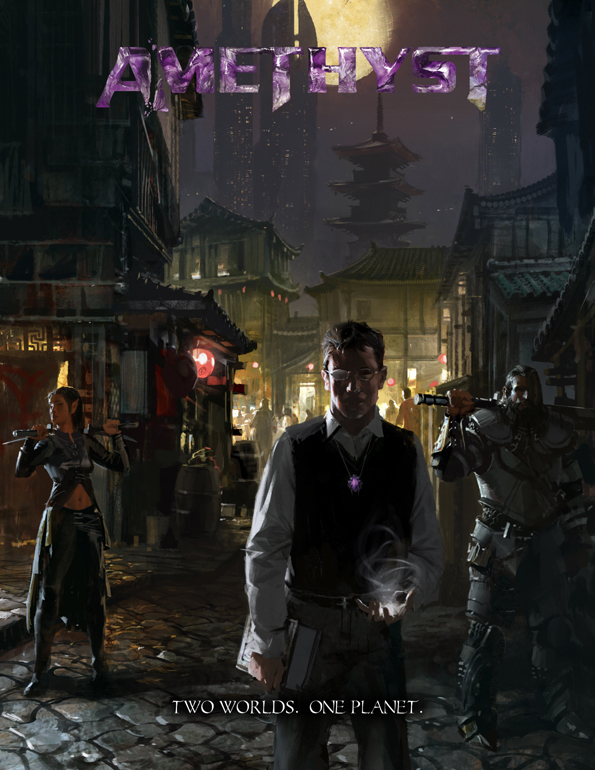 Ten more were commissioned from an artist named (redacted for soon-to-be-obvious reasons);.  These final pieces were less than disappointing.  We found ourselves stuck with an image of a dragon that looked like a skeksis wrapped in cabbage (skeksis…Dark Crystal—oh forget it).  My co-writer kept insisting we send her an image of a baby crying to reflect our opinion.  That actually wasn’t the worst of it.  That would fall to a very well known artist (larger than Jones at the time) that had been signed on to do ONE color image.  Despite being contracted and offering an initial sketch, he never delivered the final despite repeated emails.  It just goes to show you that being popular and talented does not equate a respectable businessman (I was tempted to show the image, letting people guess at who it was).

Of all the artists we approached, only one—one—would work in black and white.  Well, not exactly.  It would be more accurate to say only one gave us a rate that reflected the reduced costs of black and white as well as displaying a quality that we considered on the level we wished.

This was Nick Greenwood.

The irony of this story is that after Amethyst Foundations released, Dias Ex Machina has been flooded with offers from artists, all of which accept B+W commissions.  I know it sounds like I am downplaying Nick’s importance, and you would be right…It does sound this way.  At the beginning, I didn’t think anything of it.  I later came to realize the decency of the artist as well as the man.  He rivals the collective talent of all the others.

Here is what I know about Nick Greenwood.  He has a flotilla of daughters from a delightful wife.  He is as far opposite on the social, political, and spiritual axis from me as two people could be and still manage a high level of courteous discourse.  To quote Edward R Murrow, “he’s one of those civilized individuals who did not insist upon agreement with his political principles as a precondition for conversation or friendship.”  At first, I had only commissioned Nick for a dozen images.  I believe I have since paid for his kid’s dental work (not that they need it).  This expanded quickly to twenty images, then to thirty.  Nick somehow knows exactly what I want and even when he misses, he does so by only a few degrees.  But most importantly, when we do differ in ideas, his insistence on ensuring the quality of the end product trumps any ego he might have.  Every image in a DEM publication has a purpose, a specific person, place, or event.  We don’t have the budget to commission filler.  When I received my first final commission from Nick, I was amazed…only to discover that it was still a sketch and the final was still to come.

As we moved into Foundations (the 4E edition), I only brought in one other talent, Jeremy Simmons, to handle our maps.  I remain working with Jeremy because he shares with Nick that level of high quality.  Despite agreed upon rates, neither man will allow a work of art to be published if it does not reflect the best they could make it.  Nick was the only artist rehired for Foundations.  Rehired is inaccurate, as he never went anywhere.  I just continually send him money like I’m leasing his services.  Since then, I’ve seen him deliver the most amazing artwork I’ve ever seen in a game.  He once mentioned his strength was in monsters and characters, and that he’s no good with technology.

Moving into NeuroSpasta (our next campaign setting), I asked him to alter his entire artistic style.  He did so.  Few can.  There’s an appeal to having artwork consistent in a publication, especially one like a role playing game.  It’s unfortunate to flip through a book and notice the quality and style of artwork shift drastically from page to page.  I still fondly remember the artwork from Palladium, Dream Pod 9, and R. Talsorian.  Today, I find myself surrounded by books with incredible art budgets, flooded with digital landscapes by the hands of skilled artists. Regardless of anyone’s opinion on the writing in Amethyst, I will always defend the quality of its art.  I have found myself often commissioning art for a product that may not justify the cost given potential returns.  I never regret those decisions.  No matter if the product succeeds or fails, it will always look good.