Few role-playing games have the enduring power of “Dungeons and Dragons.” Many games arrive with some fanfare and then quickly fade from our 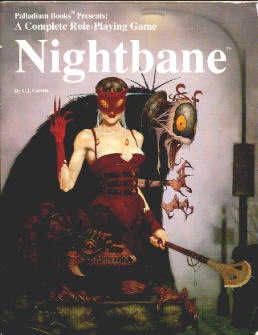 collective memories. Perhaps the world was too complex, the rules substandard or the publisher went bankrupt. I am now starting a new, semi-regular feature on Livingdice.com to remind the gaming community about these forgotten treasures, lest they fade into oblivion. My initial entry is the obscure Palladium Books offering entitled “Nightbane.”

Originally titled “Nightspawn,” Palladium encountered some legal difficulties with Mcfarlane Toys and their “Spawn” copyright. I am not certain of the entire story, but the net result is the first edition is called “Nightspawn” and subsequent editions are “Nightbane.” Regardless of the title, they are all the same game.

Firs the bad news; it uses Palladium’s standard rules set. I freely admit that the Palladium SDC system is marginal at best and some gamers truly hate it, but I find it tolerable. You do not play Nightbane for the rules, you play it for the world. And the world is truly impressive.

First off, the weird creatures on the cover are the PCs! There are other character classes, but they barely hold a candle to the twisted Nightbane PCs. The physical characteristics are randomly generated and the charts are just cool. Animal traits, bleeding wounds, nails through your skull and other sorts of deformity are all on the menu for a Nightspawn…often at the same time! Since each trait usually conveys some benefit or ability(nails in the skull add to your hit points), the freakier you are, the tougher you are. Relax, you are a shape-shifter, so you can look human when you like…with no powers of course. There is always a downside.

Nightbane are very tough, but they need every ability just to survive. The game takes place in the early 21st century, a world most of us will recognize. There is one tiny difference; extra-dimensional creatures, called “Nightlords” secretly invaded Earth and now control most aspects government and the military. Nightlords are cunning creatures, once human, they now wield immense power (not magic, direct matter conversion. They can turn a beer into a grenade with a thought) from the shadows. From their dark dimension they brought foul minions both human-looking and totally alien…and they are bent on genocide.

One of the reasons I like this game so much is the fact the villains are actually intelligent. They are not running around fighting humanity, they are slowly killing us with our own popular culture while they watch from afar. Some of the evilness includes diet food that slowly starves users to death, slow-acting magical poisons in the soda pop and old-fashioned fanatics operating death squads. The game is less “Dungeons and Dragons” and more “X-Files” in tone.

Satire is an important part of the game and it actually has more than a little black humor. For example, the Nightlords produce a television show called “Nightbane” that uses actual battle footage between Nightbane and Nightlord minions. Whenever someone sees a battle, they are written off as people who watch too much television. I am surprised the author did not include a bit about the evil overlords releasing an RPG game called “Nightbane”…

The Nightbane are not alone in their battles with the Nightlords. Allies ranging from intelligent weapons, vampire hybrids, government spooks, Area 51 and aliens wage a secret war against the Nightlord invasion(all playable PC types). When fighting on Earth gets dull for the players, move to the Nightlands, a desolate mirror image of our world. The Nightlands have their own assortment of creatures and cultures and are the Nightlord’s home dimension.

This is a subtle, thinking RPG. Though powerful, Nightbane and their allies are vastly outgunned by the corporate and government resources of the Nightlords. An open assault is suicide. Subtle sabotage, quiet knives in the dark and secrecy are the order of the day.  Remember, most people do not know about the invasion and would happily kill a Nightbane as a “monster” long before determining their good intentions. In fact, one of my players died a miserable death at the hands of a very human mob when he transformed in a crowded cowboy bar. Good times.

The game appeared in 1995 and three supplements came out in relatively short order and then all went quiet. The first new supplement in years comes out later this year. I am looking forward to it and hope it advances some of the mysteries hinted at in the earlier books. Notably, the connection between the Nightbane and the Nightlords. Nightlords are very resistant to most damage, but Nightbane attacks cut through them like butter. This is never explained and I would like to know more…

This is the first entry in what I hope will be a series over the next few months about games that deserve a reprieve from oblivion. I am open to suggestions as to games I should feature. Drop you suggestions in the comments and I will happily entertain them.