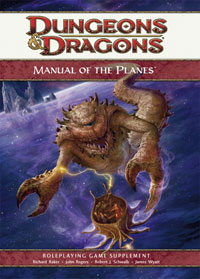 I will admit it. In all the iterations of Dungeons and Dragons, I never purchased the Manual of the Planes. Well, until now. I never was interested in different planes, universe cosmology, or portals to another dimension in my D&D games. But in 4E, there was one specific item that made me take the plunge. And that item was Ravenloft.

Before getting into that, let me take you through the new Manual of the Planes. What to expect and what it contains, so you too can decide if it is right for your game table. The first chapter is Exploring the Planes. This chapter talks about the different types of planes, the overall D&D 4E Cosmology, what portals are and how they work, planar hazards, and planar vehicles. I really like how the new planar layout looks. It is much more manageable and usable then previous iterations. It still doesn’t make me want to jump for planar joy, but I thing there are more aspects of planar travel that I will incorporate in my games then I ever have before.

Chapter 3, The Shadowfell, was the section I most looked forward to. I was filled with mixed emotions when I found out that WOTC wrapped Ravenloft into the Shadowfell. I was very sad that Ravenloft wasn’t announced as a “Core World” product, though it still could be. But I was happy that it was still living and breathing under it’s less known name; The Domains of Dread. I was excited, for in Dragon 368, they showed us their first Domain of Dread: Sunderheart, the Funeral City. Unfortunately, the Manual of the Planes, did not go into any more of detail of new Domains of Dread. Nor were there any of the classic Ravenloft locales. My hopes are now placed into next months release, Open Grave. At least we know that it will contain stats for everyone’s favorite Vampire, Count Strahd. What this chapter does contain is information fairly similar to the Feywild section and a nasty new disease called Soul Rot.

Chapter 4 is all about The Elemental Chaos. From where the D&D universe was created, the E.C. is home to Demons, Archons, Genasi, Slaads, and of course Elementals. It also features the famous City of Brass, home of the Efreets. The E.C. is also the location of many other exciting adventuring spots. The Demonweb, The Abyss, and Zerthadlun, a great Githzerai city.

Chapter 5 brings The Astral Sea. This great silvery void is  home to The Nine Hells. To quote a great man, “You will never find a more wretched hive of scum and villainy.” Though, Tu’narath, the greatest of all Githyanki cities is a close second.

Chapter 6 presents new Monsters of the Planes. While mostly Demons and Devils, there are 31 new monsters to throw at players. There are no new undead, which sucks. But Baphomet, a deity of the Min0taurs, appears.

Finally, chapter 7 is for the Planar Characters. All the good crunch that players want. There are 8 new paragon paths, 12 new rituals, including the return of an old favorite, Rope Trick. and 8 new pages of magic gear for characters of all kinds. And for the low-low price of a cool 3,125,000 gold… you too could have your very own Spelljammer.

All and all I give this book three out of five dice.

The information was interesting, but it almost covered too much for such a little space. The Feywild and Shadowfell section could easily be expanded into their own books, and I was hoping for fewer locations in more detail.  And of course, my personal peeve of not covering enough of the old/new Ravenloft stuff. Also the book was a little on the thin side. It carries the same $29.95 price tag as the 3.5 Planar Handbook, but only comes in at 159 pages (instead of 192).  But that seems to be the new trend for the $30 book, as that is the same page count as Martial Power and the Forgotten Realms Players Guide.

But there was a lot of good info in the book and it was very well written. I look forward to some comments of what people think of the book.

4 thoughts on “Review: Dungeons and Dragons 4th Edition Manual of the Planes”